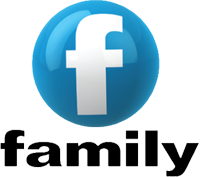 No, not THAT one. Or THAT one.
Never a dull moment
— Slogan from the 2000s
Advertisement:

Family Channel (shortened as Family) is a channel that airs family programming. Specifically, it's a Canadian channel launched in 1988 that previously aired series aimed at preschoolers during the day, kids in the afternoons, and teens in the evenings, along with family-oriented movies. Until 2016, it was a premium, commercial-free service that operated similarly to other, ad-supported kids networks. As such, its direct American counterpart would have been HBO Family, but it is otherwise not to be confused with any similarly-named channels outside of Canada, especially the channel formerly known as ABC Family.

However, Family is most known for airing several series acquired from ABC Family's sister networks: Disney Channel, Disney Junior, and Disney XD. Family would even go so far as to replace some it's own program blocks with Disney-branded blocks. For example, the preschool-oriented Playhouse/Family Jr. block would be relaunched as Playhouse Disney on Family, while the action-oriented Power Box was replaced with a Jetix-branded block. Family would also launch Disney Channel's spinoffs, including a newly-rebranded Disney Junior, as its sister networks. Owing to this, and the Disney Channel Live-Action Universe tween-coms that had come to dominate the schedule by the early 2010s, Family Channel was unofficially nicknamed "Disney Channel Canada", much to the irritation of Canadians who disliked Disney Channel's direction at the time just as much as a vocal portion of American viewers did.

Outside of that, Family has commissioned several original series of its own, such as Franklin, Life with Derek, and Katie and Orbie. Family has also aired a handful of series from Nickelodeon in the past, despite that network's long-standing relationship with YTV. The Other Kingdom may very well be the first associated co-production between the two networks (unless you count Are You Afraid of the Dark?, which originally aired on YTV). Most programming aired in the '80s and '90s tended to be co-produced in association in some manner with HBO. As both were commercial-free, pay-TV services, they would logically cooperate on commissioning series that both could air without having to edit anything, rather than rerun series from other networks. note Such shows have included Babar, The Adventures of Tintin (1991), The Neverending Story: The Animated Adventures of Bastian Balthazar Bux and The Little Lulu Show (the first three were mainly produced by Nelvana, the last by CINAR).

Ultimately, in 2015, Family Channel would remove Disney Channel's programming in favor of its own as well as shows from other companies like DreamWorks Animation. The decision to focus more on Canadian programming coincided with The Next Step solidifying its place as Family's first breakout series since Life with Derek. In addition, Family would briefly launch its own late-night block, F2N, which would be anchored by the newly launched Degrassi: Next Class. Corus Entertainment, who already owned the Canadian version of ABC Family (known as ABC Spark), would acquire the rights to programming from Disney Channel and its sister networks and, eventually, relaunch said sister networks.

Originally owned by Allarco as a joint venture between its Superchannel (the now-defunct Movie Central) and First Choice (what is now known as Crave), similarly to how HBO Canada used to operate. Family was later sold to Astral Media, who, at the time, was co-owner of Teletoon (alongside Corus Entertainment). After Astral was demolished by Bell Media, Family and its sister networks were sold to their current owners at DHX Media (now WildBrain) in 2013.

The following series were originally produced for Family (listed alphabetically):

Live-Action TV (premiere dates and production companies are in brackets)

Western Animation (premiere dates and production companies are in brackets)