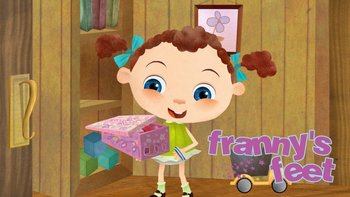 Where will my feet take me today, nobady knows for sure.
But come for a walk, I'll lead the way, to places never seen before.
Advertisement:

Franny's Feet is a Canadian Animated Edutainment show produced by Decode Entertainment (now WildBrain) and created by Cathy Moss and Susin Nielsen. It's about a little girl named Franny who has the power to go anywhere in the world by (literally) putting on someone else's shoes.

First aired in 2003 in Canada on Family Channel and 2006 in the US, the show is about Frances "Franny" Fantootsie, a four-year-old girl who visits her grandfather, a shoemaker, every day. Then when he's not looking, she tries on some shoes that he has been given to repair, and is somehow transported to a place in the world related to the shoes. There she makes new friends and often learns a lesson as well. Then she returns before her grandfather notices she's been gone, and he fixes and returns the shoes.

The whole point of the show is to introduce children to cultures they might not know much about. Its Limited Animation style (that makes it look as if everything where made out of paper cut-outs) is another notable point.

The show ran for 52 episodes over 4 seasons. It has been aired internationally (usually in Public Broadcasting channels) and has been dubbed into Spanish. It has been honored as an Outstanding Product of 2006 by iParenting Media Awards. In 2009, a movie called Franny's Feet: Arctic Antics was made as well.