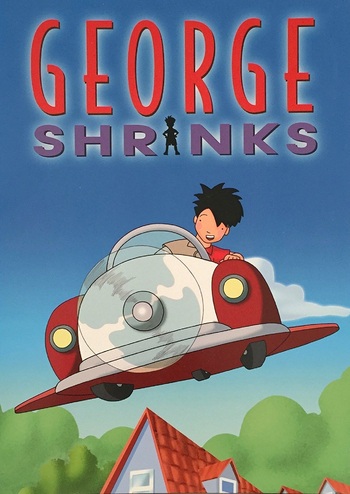 George Shrinks is a Canadian animated television series based on the children's book of the same name by American author William Joyce and produced by the world-famous Nelvana studio (with China's Jade Animation helping out as well) in association with PBS Kids. This series was the second collaboration between Joyce and Nelvana, as Joyce had previously done Rolie Polie Olie with the studio. Also like Rolie Polie Olie, Joyce was heavily involved in the production of the show and served as an executive producer.

The show tells the story of a ten-year-old boy named George Shrinks who is only three inches tall. George lives with his musician father Harold, his artist mother Perdita, and his baby brother Harold Jr. ("Junior" for short), finding adventure with them and his friends (primarily his best bud and neighbor Becky Lopez) in mundane situations - something that comes naturally as a result of his diminutive size. But through a mixture of his own ingenuity and imagination, as well as a variety of highly adaptable mini machines built by him and his dad, George proves that being tiny is no obstacle to solving problems and having fun.

The series started on September 30, 2000, on PBS Kids as part of the PBS Kids Bookworm Bunch. The Bookworm Bunch disbanded in 2004, but George Shrinks was given an individual PBS debut on January 6, 2003, along with The Berenstain Bears and Maurice Sendak's Seven Little Monsters. It also aired on YTV (and later Treehouse TV) in its native Canada. The series ran for 3 seasons with a grand total of 40 episodes.