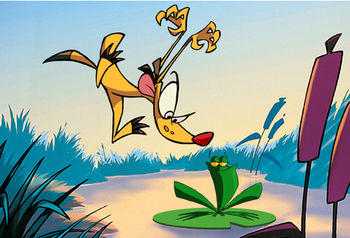 The show is basically Tom and Jerry with a frog and a ferret. The ferret spends all of his time trying to catch and eat the frog, but fails every time due to an intrusion of some sort, usually because someone else wants the frog. The frog itself is carefree enough that it completely does not take notice of when anyone is endangering his life.

Recurring places for the ferret to wind up in during his frog-capturing exploits include a restaurant owned by Chef Maurice, a swampy area serving as the home of Bayou Joe, and a pink castle, complete with a king, queen, and princess.