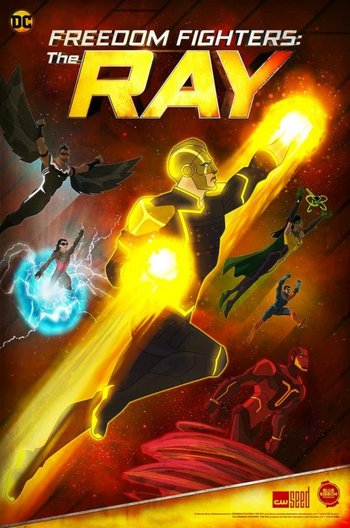 Freedom Fighters: The Ray is an animated web series that aired in 2017 on CW Seed. It's part of the Arrowverse and it is the second animated series to be set in that universe, but unlike Vixen, it takes place on a parallel world called Earth-X — where the Nazis won WWII.
Advertisement:

It focuses on Ray Terrill / The Ray (Russell Tovey) who, while investigating a secret project of government officials attempting to use light as a weapon of mass destruction, got caught. The head of the project exposed Ray to a "genetic light bomb", hoping to kill him, but instead it gave him light-based powers. Realizing he could actually stop crime instead of just report about it, Ray joins Uncle Sam and the Freedom Fighters to fight crime and oppression. However their task isn't easy for they have to contend with the enforcers of the Nazi Regime — the New Reichsmen, who bear a remarkable resemblance to the heroes of Earth-1 and one benevolent Kryptonian from Earth-38.

The series is also going to be notable in that it's the first superhero series where the title character is a member of the LGBT community.

On September 22nd, 2017, it was announced that the Ray would be an essential part of the 2017-2018 four-part crossover — Crisis on Earth-X, where he teams up with the heroes of Earth-1 to stop the New Reichsmen from invading their Earth.

Freedom Fighters: The Ray contains examples of the following tropes: