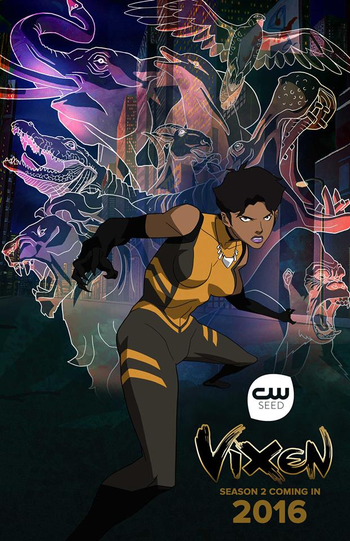 Vixen is a 2015 animated online series airing on the CW Seed, and a spinoff of the Arrowverse. It focuses on the eponymous comic book character (Megalyn Echikunwoke), whose real name is Mari McCabe, as she seeks knowledge about her birth parents and her magical heritage - running afoul of the law as well as the Arrow and the Flash.

The series consists of six five-minute episodes, which began airing on August 25th, 2015. The series was renewed for a second season in January 2016 and Megalyn reprised the character in live-action for Arrow's fourth season in the episode Taken.

The first season takes place sometime around the 2014-2015 Arrowverse season. Mari comes back to her hometown of Detroit. During an attempted mugging her totem necklace begins to manifest its powers, which draws the attention of Barry and Oliver, who merely want to help Mari understand her powers, and an unsavory woman who hold the answers that Mari's been looking for her about her heritage.

The second season takes a place a year later during the 2015-2016 season, before the formation of the Legends. A mysterious African ambassador with connections to Mari's birth family begins causing havoc in Detroit and she teams up with the Atom and Black Canary to stop him before he destroys the city.

The first two seasons were edited together with 15 minutes of new footage and was released on DVD on May 23rd, 2017 under the title of Vixen: The Movie.

Two years after it premiered online, Vixen had its terrestrial broadcast debut on August 30th, 2017 airing as the omnibus movie version.