You're Not My Father 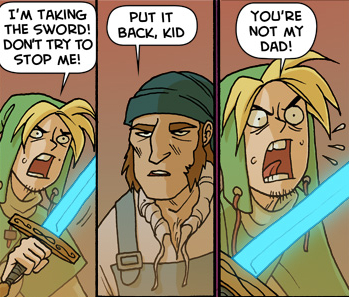 Will: Ain't even nothing to talk about. I been waiting for this a long time, my whole life, and ain't nobody gonna stop me. Come tomorrow, I'm outta here.
Uncle Phil: Oh yeah, I don't think so.
Will: Who cares what you think?! YOU ARE NOT MY FATHER!
— The Fresh Prince of Bel-Air, "Papa's Got a Brand New Excuse"
Advertisement:

The closing line to any fight or disagreement between a child and either their parent or (more commonly) their important replacement parental figure (in the right genre, between the hero and their mentor). Often a form of Calling the Old Man Out.

This is either a loophole for someone who really is in the wrong and wants a reason to end the argument without defending themselves, or a way for a Good-aligned (or standards-bearing) offspring to inform their Evil-aligned parent [figure] that they have crossed the line and is no longer worthy of respect, admiration, or obedience. It can also be delivered to deliberately hurt a parental figure who genuinely feels that they are their parent in every sense but the biological. In this case, the accusation typically leads to guilt on both sides, and usually a last-minute apology and reconciliation...unless it turns out to be the last time they ever speak.

A stipulation is that the mentor has been more of a parent than the referenced father ever was. Or maybe an older brother with a Promotion to Parent, or a stepfather in a Blended Family Drama.

Much more rare, but not unheard of, is for someone to say this to their biological parent, oftentimes directly pointing how much better the Parental Substitute was at the job. Calling Parents by Their Name is a common way to express this variant. If this happens, it's possibly because the child just Hates Their Parent.

A twist that turns up the tension is "You're not his father."

Compare/contrast with I Have No Son!, to which the teen may fire back with this trope. Note that this trope is not generally related to I Am Not Your Father, since it's usually understood by both parties that the person really isn't their father (and that's the point).

Alternative Title(s): You Are Not My Father, Youre Not My Mother