Film / The Rise of Skywalker 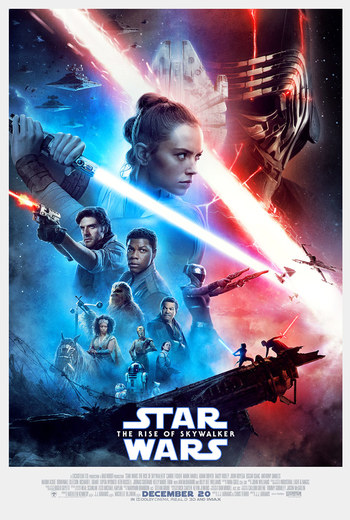 Luke Skywalker: Rey, the Force will be with you, always.
The dead speak! The galaxy has
heard a mysterious broadcast,
a threat of REVENGE in the
sinister voice of the late
EMPEROR PALPATINE.

GENERAL LEIA ORGANA
dispatches secret agents to
gather intelligence, while REY,
the last hope of the Jedi, trains
for battle against the diabolical
FIRST ORDER.

Meanwhile, Supreme Leader
KYLO REN rages in search
of the phantom Emperor,
determined to destroy any
threat to his power....

One year after the events of The Last Jedi, the replenished Resistance finds out Emperor Palpatine has come back from his sudden demise, and they do everything they can to stop him from being a threat to the Galaxy as a whole once again. While helping them find the location of Palpatine's lair, Rey learns of her true origins, and she's driven to confront Kylo Ren once again.

Star Wars: The Rise of Skywalker provides examples of: