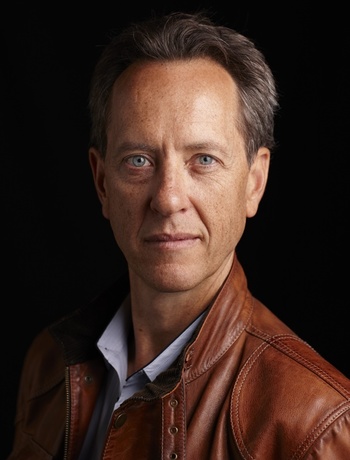 "Dick Grant is one of my favorite people to work with. Anyone who can match me stroke for stroke when I go over the top is a man I admire. He's a true scenery chewer's scenery chewer!"
— Anthony Hopkins
Advertisement:

Richard E. Grant (born Richard Grant Esterhuysen; 5 May 1957) is a British actor of Afrikaner descent born and raised in the small African country of Swaziland (today eSwatini). One of his earliest, and still one of his best-known, roles was as Withnail in Withnail and I. Other notable roles include the villain in Hudson Hawk, the hero in Warlock (1989), Dr Seward in Bram Stoker's Dracula, and the title character in the 1999 TV version of The Scarlet Pimpernel. His performance in Can You Ever Forgive Me? was widely praised and earned him an Oscar nomination for Best Supporting Actor.

He has played two different and non-canonical versions of the Doctor, first in the charity spoof Doctor Who: The Curse of Fatal Death, and then in the animated expanded universe special Scream of the Shalka (which was this close to becoming canon, had the 2005 revival not happened). An incarnation of the Master, appearing in the novel The Infinity Doctors in the Past Doctor Adventures range, was also modelled after him. He was eventually cast as the villain in the 2012 Christmas Special, "The Snowmen" — which means he played an alternate Ninth and an alternate Tenth Doctor, before fighting the Eleventh.

Grant has been an avid diarist since childhood (ever since he caught his mother cheating on his father in the back of a car), and has published the diaries he's made during filmmaking in two books, With Nails and The Wah-Wah Diaries. He's also written a satirical novel on the making of a disaster movie, By Design. He is now on Twitter too

He also wrote and directed the 2005 film Wah-Wah, inspired by his own childhood experiences.

On September 3, 2021, Grant announced the passing

of Joan Washington, his wife of 35 years (although the couple were together for 38 years in total), with whom he had one daughter and a stepson.