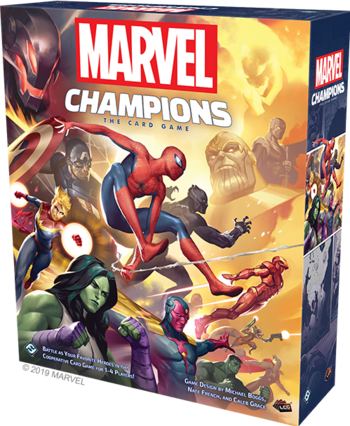 "What do you mean half these people aren't in the base box?"
Advertisement:

In this co-operative card game, players take the role of Marvel Heroes and fight together against one of several villains. They do so by playing cards, whose types include Events, Allies and Supports; cards are paid for by discarding other cards, which generates resources, and the choice of which cards to play and which ones to spend is extremely important. The game is very tactical and requires coordination for the heroes to win.

Marvel Champions revolves around a simple round structure: each hero, starting from the first player, takes a turn. Then the villain goes. Villains have a main Scheme that, if completed, will result in the players losing, and can and will attack the heroes, possibly knocking some of them out of the game. Villains also have an encounter deck, made from villain-specific cards and generic ones, from which cards will be drawn that will do bad things to the heroes.

The basic set for the game was published in 2019. Several expansion packs, including new heroes and scenarios and two major expansions (Rise of the Red Skull and Galaxy's Most Wanted) have been released.