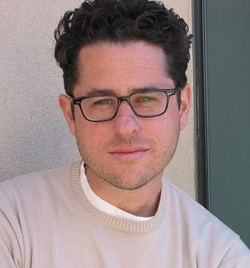 "What's a bigger mystery box than a movie theater? You go to the theater, you're just so excited to see anything - the moment the lights go down is often the best part."
Advertisement:

Jeffrey Jacob Abrams (born June 27, 1966) is a producer, writer, director and creator known for his work on Felicity, Alias, Lost, Fringe, Cloverfield, Armageddon, Mission: Impossible III, the Star Trek (2009) film, its sequel Star Trek Into Darkness and Star Wars: The Force Awakens. He has won several Emmys and Golden Globes during his roughly 20 years in the industry.

Along with Joss Whedon and Christopher Nolan, he is considered one of the most prolific modern "genre" TV/film creators since Steven Spielberg, including by Spielberg himself, who produced Abrams' tribute to 70s/80s Spielberg sci-fi, Super 8.

He likes red balls and playing with the perception of time, as well as having a thing for Lens Flares. He hates airplanes (both Lost and Fringe have had more than one airline-related disaster—and the other stuff on the list of credits also have had aviation-related incidents).

Contrary to popular belief, his involvement in Lost was marginal: He and eventually Damon Lindelof were asked to help flesh out a concept for the show when ABC chairman Lloyd Braun rejected Jeffrey Lieber's treatment, but by the time the first season started to take off, Abrams had already left to direct Mission: Impossible III. Lindelof, suddenly left alone with the Showrunner burden, considered quitting too, but was convinced by former co-writer Carlton Cuse to stay. Cuse then joined the show as a second showrunner. Abrams remained an executive producer, and later briefly returned to write the season 3 premiere together with Lindelof, but as he and others stated in numerous interviews Lindelof and Cuse ran the show entirely without him.

Has a similar "shepherding" role to most TV series he is involved in, including Fringe and Person of Interest, With his most hands-on projects being his movies. He also developed the concept for the novel S, which was written by Doug Dorst.

Has the notable distinction of being the only director (so far) tapped to helm both a Star Trek and a Star Wars movie — with his involvement in the former series being due to the fact that the latter series had, at that time, ended. As of 2019, he's gotten to direct two of each.

Works he has credit in

J.J. Abrams and his works frequently contain examples of: