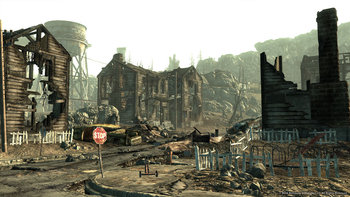 What a beautiful vacation spot!
"Wherever you walk here it is hunks of buildings standing up without roofs or sides, and people living in them. Except the Ghetto, where it is just a great plain of bricks, with twisted beds, and bath tubs and sofas, pictures in frames, trunks, millions of things sticking out among the bricks. I can't understand how it could have been done...It is something so vicious I can't believe it."
— John Vachon, on Warsaw, 1946. Quoted in Savage Continent by Keith Lowe.
Advertisement:

Picture this: you are making your dream After the End film, comic, manga, or book, and you need a way to really knock it into your audience that this world is, indeed, a Crapsack World. What do you do? Cue slow pan over abandoned, bleak, ruined cityscape or radiation-scorched wilderness. Preferably both. If you're doing a dystopian or cyberpunk work, be sure to have gloomy, twilit, ominous, monolithic skyscrapers towering over masses of stinking poverty — lots of smokestacks, toxic waste and pollution by the slums, and decadent advertisements choking the more economically robust areas. If you're making a Disaster Movie, be sure to have tons of destroyed skyscrapers, overturned cars, general burning chaos, or in the aftermath, mute, smoky desolation.

If it's post-apocalyptic, it's a look of abandonment rather than slums/sprawl or recent destruction. Buildings are crumbling, collapsed, torn open, leaning. There are rubble piles at the base of walls, peeling paint. Familiar objects are weathered, rusted, rotted, sun-bleached, and may be encrusted in dirt and dust which has been wetted by rain at some point and dried. Buildings, vehicles, etc may be half-buried in sediment as if a flood had come through — basically they're melted into the ground. Cracked desert soil is common, though not required. The next likely option is jungle-like overgrowth as the Earth retakes the city. Many of these elements are directly based on what has already happened in real abandoned locations.

This is also popular with apocalyptic and disaster films. Compare Desolation Shot. Ruins of the Modern Age is a subtrope. Contrast Apocalypse Wow, which has a broader variety of uses. If the apocalypse involved a plague or virus instead of bombs, expect Ghost City.

High Dynamic Range (HDR) renderings seem to go hand-in-hand with Scenery Gorn, as everybody taking pics of real-life examples (below) seems to be addicted to HDR. Seems to be uniquely useful here since interiors lit only with sunbeams through windows or holes can't be accurately depicted with normal photographic technology when lit as they actually occur, and that natural lighting is essential to remaining authentic to the scene.

Closely related (possibly sub-) tropes are Saharan Shipwreck and Ribcage Ridge, and often includes an Empathy Doll Shot. Not to be confused with Gorn Scenery.