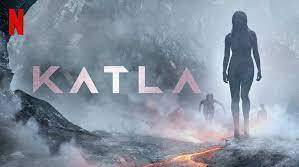 Come to sunny Vík and meet old friends!
Katla is an Icelandic TV series, created by Baltasar Kormákur and Sigurjón Kjartansson and shown internationally on Netflix. The first season dropped in 2021; plans for a follow-up season are as yet undeclared.
Advertisement:

The series is a paranormal mystery making full use of the stark landscapes of Iceland for its mood, and in fact making them worse. It starts a year after a fictional eruption of the real subglacial volcano Katla

has blanketed much of the surrounding countryside in ash, causing the (real) village of Vík í Mýrdal

to be largely evacuated. Then, people start showing up in the area naked and covered in black ash. It soon becomes evident to viewers that these are duplicates of real people; in some cases the originals are dead, but in others they are still alive but physically older than the duplicate. The duplicates appear not to remember where they came from, and generally seem as confused as anyone else. In fact, everyone reacts plausibly to the mystery, which means that most of the characters take several episodes to even begin to accept what is happening.