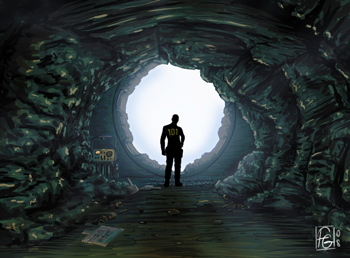 "Dare to breach the surface and sink." note  quote by Vera Nazarian. Image

"I was so scared then, but in a way it was really fun. I mean, every boring day had been just the same for me. But this... this was the beginning of a real adventure!"
— Max, Dark Cloud 2
Advertisement:

The outside world is the world beyond the constraints of a secluded or isolated place. It makes up the essence of nearly every adventure or dystopian story. When a character crosses the threshold of their home, they are stepping into the Outside World.

This is one of the most important steps on The Hero's Journey. If it's only reached at the end of a work, Ending by Ascending may be involved.

A character begins as a member of some commune, or is living in some form of confinement, that has been segregated from the rest of their world. It can be through psychological means, (laws, threats of violence or death, etc.) or physical (walled, domed, buried, locked, ensorcled, etc). Usually, though, it is a Small, Secluded World. The Powers That Be might confine an entire society for a variety of different reasons, like to make sure that nothing dangerous gets into the community. Or gets out...

The reason a character may want to leave such a society depends greatly on what kind of world they live in and their personality. So the Outside can be a source of strong enticement... or immeasurable fear. This is the call to adventure. Here a character may voluntarily leave their society or be forced out.

Once the character has been spurred by a catalyst, crossing the threshold may yield many results.

When a character literally crosses the threshold, the Outside World can be beautiful and lush, full of dangers, or, sadly, a world devoid of life with nothing but dust and crumbling structures.

The Outside can alternately be a land of discovery for a person who was isolated to avoid societal contamination. A world that is full of mundanity for the average person would be confusing and amazing to a person coming from isolation.

This is a super trope of the following: