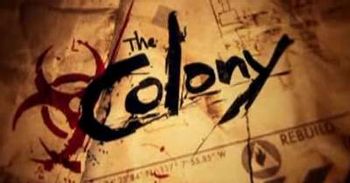 The Colony is a "survival experiment" broadcast on The Discovery Channel, in which ten people (and later more) must rebuild after a simulated viral outbreak kills most of the human population. They are given several blocks of abandoned industrial park bordering the Los Angeles River in downtown Los Angeles, where they are allowed to do anything they want and scavenge any supplies they can find.

Emphasis is placed on dealing with resource scarcity, novel uses of common (and not-so-common) found items to provide for the group in such a situation, and weighing the survival of other groups against the survival of one's own (i.e. stealing). There are several semi-scripted encounters with others (various wanderers, raiders, and a trader), which demonstrate possible social interactions in such an environment and the play between compassion (give them food because it's the right thing to do?) and pragmatism (keep it for yourself because you need it more?). All actors are forbidden to directly harm the Colonists (lest they risk an insurance nightmare and subsequent cancellation), but panic, emotion, and malnutrition (on the Colonists' side) meant that accidents could still happen.

A second season aired with a new setting (Louisiana), apocalypse scenario (Bird Flu outbreak) and group, and has fixed the main criticism leveled at the first season (hostile groups being forbidden to directly harm the colonists).

With a bevy of improvisation, survival tips, the lack of a "game show" atmosphere, and the lack of a tangible "prize" other than the experience itself, The Colony is an interesting series that breaks from the typical reality show mold.

The first season of The Colony provides examples of: