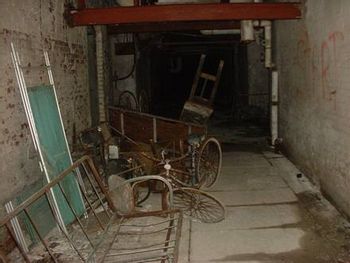 The doctor will see you now.
"ALL DEAD HERE"
— The Stand, spray-painted hospital sign
Advertisement:

Even without all these things, hospitals are pretty creepy to begin with. Maybe because hospitals are associated with illness and death, as well as being places that should be clean. Or perhaps it's because most people are afraid of hospitals for several reasons: germs; the stale, blaring white atmosphere; doctors poking and prodding you with weird and often painful instruments... not to mention the needles... There's also the fact that, despite every attempt to prevent it by the staff, a good amount of death inevitably happens at a hospital, which doesn't help to assuage any creepiness. On top of all that, a hospital is likely one of the last places to be abandoned in a crisis, since you would need to treat the wounded and sick even more during an emergency. If even the hospitals have been abandoned, things may have really gone south.

Many older, real-life 'abandoned hospitals' in the U.S were properly called "sanitariums," and have probably contributed to the trope imagery. Their abandonment was sometimes related to loss of funding or new prohibitively expensive fixing due to new government regulations. Often the places were created to treat specific diseases at the time that were eventually locally eradicated (TB clinics in particular) without any later re-purposing of the structures. In popular fiction, sanatoriums also tend to get mixed up with sanitariums, which can lead to conflation of physical and mental illnesses. As for the mental sanitariums, the enduring image of the ominous, Arkham-esque Gothic building sprawled out on a hill was in large part due to Dr. Thomas Kirkbride

(1809-1883), who spearheaded a revolution in ethical treatment of mental patients. He insisted that mental institutions should be restful places, with large and rambling rooms and corridors, airy high ceilings and windows, and large outside grounds for the patients to roam and get their exercise (he probably did not insist on Gothic architecture, but that was how most buildings were built back then). Unfortunately, most of the Kirkbride buildings turned out to be much too expensive to maintain and renovate to be compatible with new medical technology, which resulted in a lot of them being abandoned.

See also Abandoned Warehouse and Never Recycle a Building. When a character wakes up in a newly-abandoned hospital, that's an Abandoned Hospital Awakening.

By the end of the film, the hospital is completely deserted except for Dr Abrams, with the remaining medical staff having run for their lives and the patients having all died. For good measure, it's lit exclusively by red emergency lighting, making it even creepier.

By the end of the film, the hospital is completely deserted except for Dr Abrams, with the remaining medical staff having run for their lives and the patients having all died. For good measure, it's lit exclusively by red emergency lighting, making it even creepier.