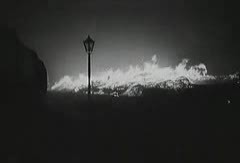 Siege is a 1940 documentary short film (10 minutes) directed and photographed by Julien Bryan.

It is a visual record of the siege of Warsaw, at the beginning of World War II. Bryan arrived in Warsaw on September 7, after the Polish government and all the rest of the foreign press had evacuated. He was the last journalist from a neutral country in the city. For two weeks Bryan, accompanied only by his interpreter, filmed the death and devastation being wreaked on Warsaw as the Germans approached. He eventually made it out of Warsaw along with other residents of neutral nations, concealing his film in a gas mask container.

No relation to the comic book, the 1998 film The Siege, or the 1983 Canadian film Self Defense (also known as Siege).