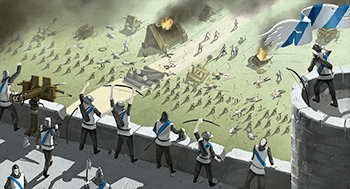 "This is where I live. This is me. I will not allow violence against this house."
— Straw Dogs

The good guys must hold off an overwhelming enemy threat against impossible odds.

It is the Counter Trope of Storming the Castle and the Super-Trope of the Last Stand.

Compare with Hold the Line, Naval Blockade, Protect This House, You Shall Not Pass!, and All Your Base Are Belong to Us. If they fail, see Watching Troy Burn. If they send someone to get The Cavalry, it's Bring Help Back.

Also the name of a 1998 film, although the siege in question is not as straightforward as the trope.

Several attempts were made in the golden age of table top wargaming to make siege games. The problem was that there is little maneuvering in siege warfare and the most interesting parts are the gadgeteering, which doesn't translate well to actual gaming.

WARNING: As this trope often comes up at the climax of a work, spoilers will be unmarked. You Have Been Warned.