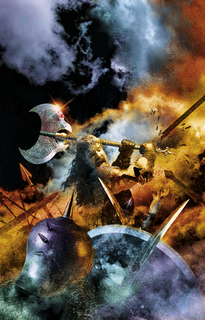 Druss would like to axe you a question!
Advertisement:

The Drenai saga is a series of Heroic Fantasy novels by David Gemmell.

The series is in Anachronic Order, with successive novels moving back and forth over the centuries-long history of the Drenai empire. The first published novel in the series (and Gemmell's first published work) is Legend (1984); in chronological order, the first novel is Waylander (1986). In either order the concluding novel of the series is The Swords of Night and Day (2004).

Alternative Title(s): The First Chronicles Of Druss The Legend, Hero In The Shadows, The Swords Of Night And Day, The King Beyond The Gate, Winter Warriors, Waylander, Quest For Lost Heroes