Useful Notes / The Duke of Wellington 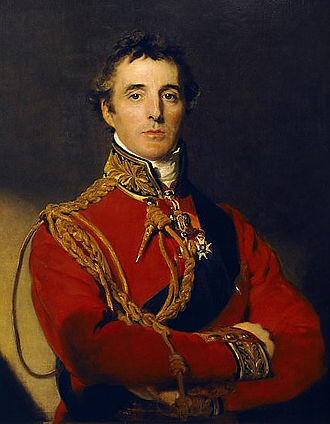 Field Marshal Arthur Wellesley, 1st Duke of Wellington, KG KP GCB GCH PC FRS (1 May 1769 – 14 September 1852), was a British soldier and statesman, and one of the leading military and political figures of 19th-century Britain. His defeat of Napoléon Bonaparte at the Battle of Waterloo in 1815 put him in the top rank of Britain's military heroes. He is often referred to as one of the greatest English generals of all time, except that he was Irish. Indeed his real name is Arthur Wesley, he added the "lle" later. His supposed response (not recorded until after his death) to people pointing out his Irish birth was something along the lines of 'If a man is born in a stable, that doesn't make him a horse', a sentiment which didn't stop him marrying an Irish woman or the Irish building a 200 ft tall monument in his honor.

To be fair, his comments stemmed from a dislike of the Protestant and often power-abusing Irish aristocracy rather than the "normal" Irish (Catholic or Protestant),note Compare how Spitting Image's famous song "I've Never Met A Nice South African" is directed against South Africa's European-descended settler minority during The Apartheid Era, not against the native Black population that they oppressed. whom he regarded as reasonably good soldiering material and thought no worse of than the "normal" English, Scottish or Welsh (which is to say, he didn't think of them very often), to the point where the Catholic Emancipation Act of 1832 was one of his key political achievements.

His rise through the ranks was rapid, reaching the rank of Colonel in 12 years thanks to the peculiar British system of purchasing promotions (there was an obligatory amount of time that had to be served before you could buy your way up to the next rank, but it was still fairly brief). Despite an extremely impressive military career in India, he did not come to real prominence until The Napoleonic Wars,note Ironically, Napoleon too was not born in the nation that he is famous for being from. His birthplace had been transferred from theoretical Genoese sovereignty to French a mere two years before his birth (and he was originally called the much more Italian "Napoleone Buonaparte"), making the Napoleonic wars between the French led by a Corsican and the British led by several Irishmen, most notably Wellington, his brother Richard Lord Wellesley, and Lord Castlereagh. Also born the same year as Napoleon. Makes one wonder... and was promoted to the rank of Field Marshal after leading the allied forces to victory against the French at the Battle of Vitoria in 1813. Following Napoleon's exile in 1814, he served as the ambassador to the Congress of Vienna and was granted a dukedom. During the Hundred Days in 1815, he commanded one of the allied armies which defeated Napoleon at the Battle of Waterloo. He is also credited with the defeat of the French under Marshall Massena in the Third French Invasion of Portugal due to him ordering the construction of the Lines of Torres Vedras

(after one of the towns through which it passed), which is considered the most cost-effective fortification in military history - it was able to effectively accomplish its tactical (defend the Port of Lisbon)note which was the communications gateway between the Anglo-Portuguese Army and the United Kingdom and strategic (defend Portugal)note For it was more easy to defend that country than advance into Spain, because he considered that Portugal as giving him all necessary conditions note Also, Portugal was for him more worthy of defense than Spain, due to the fact it had the oldest alliance with the United Kingdom and had offered the UK its full support since the Peninsular War first started, while Spain had at first offered its army and all its resources to aid France missions at a very low cost. In fact, Portugal had offered him the position of Marshall General of the Portuguese Army, which gave control of said army when in joint operations with the British Army. He used that title to reorganize the Portuguese, who were a demotivated and disorganized Ragtag Bunch of Misfits into a capable, cohesive, motivated and organized Army.

Even by British standards, he was a masterful Deadpan Snarker, making him one of Britain's more quotable war leaders after Winston Churchill. Notable examples include:

He was Tory Prime Minister 1828-1830 and again for less than a month in 1834. He also named a third ministry: the short-lived first Cabinet of The Earl of Derby in 1852 was the first time the Protectionist wing of the Conservative Party had governed, and so had a lot of new names (e.g. Benjamin Disraeli); when these unfamiliar names were read out in the Lords, the ageing and hard-of-hearing Duke interjected, "Who? Who?", and behold! the First Derby Ministry is forever known as the "Who? Who? Ministry". His political career is much less famous and far less celebrated mostly because it casts him in a less-than-positive light by modern standards, such as his anti-semitism

which led him to veto a bill that provided increased rights for Jews.note "... this is a Christian country and a Christian legislature, and that the effect of this measure would be to remove that peculiar character...I see no ground whatever for passing the Bill; and shall, therefore, vote against it." Indeed his general opposition to parliamentary reform earned him the nickname the Iron Duke, and while later supporters appropriated this sobriquet, it was originally an insult. So unpopular was the Duke, that his house windows were smashed by supporters angry at his opposition of a Reform Bill. In response, the Duke put in place Iron shutters to better protect his home. Despite this, the 1832 Reform Bill was passed by the Whigs, though the Duke was bitter about its passage. Ironically, the impetus for the Reform Act partly came from a legislation to improve the lot of Catholics in Ireland which the Duke had passed in the teeth of serious opposition. Fearing increased rights for the Irish catholic community, a faction of the Tories allied with the Whigs to get the Reform Act passed.

Yes, he had boots named after him. No, they were not rubber (not yet possible at the time — Westerners knew about rubber but couldn't yet make anything like that from it). They were leather, but the rubber ones are of the same style. The capital city of New Zealand was named after him, as is the mountain overlooking the capital of Tasmania, Hobart, and the dish Beef Wellington

The Duke in fiction: