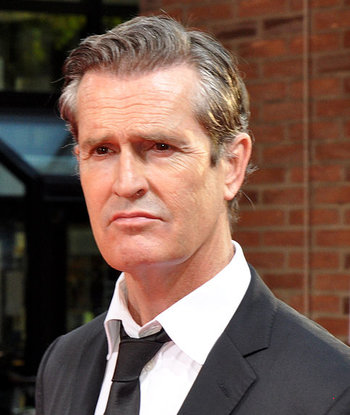 Everett in 2015. He's a lot scruffier now.
"My first two movies were classics. I should probably have died in a crash if I had been at all serious about my career."
— Rupert Everett, regarding Another Country (1984) and Dancing With Strangers (1985)
Advertisement:

Rupert James Hector Everett (born 29 May 1959 in Burnham Deepdale, England) is an actor from Norfolk, England, best known for early successes in Another Country and My Best Friend's Wedding and later successes in the second and third Shrek films, the rebooted St. Trinian's films, and Miss Peregrine's Home for Peculiar Children, as well as a role in the Black Mirror episode Fifteen Million Merits. He's also known for having roles in many film adaptations of plays, especially those of Oscar Wilde.

He as a person is best known for two things: being a cheeky cynic, and being openly gay. Everett is a staunch advocate of gay rights and sex worker rights.