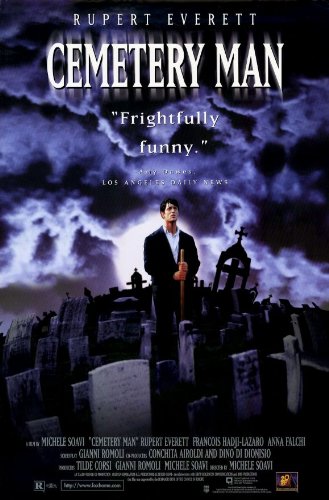 "The living dead and the dying living are all the same. Cut from the same cloth. But disposing of dead people is a public service, whereas you're in all sorts of trouble if you kill someone while they're still alive."
"This is my business. They pay me for it."
Advertisement:

Francesco Dellamorte (Rupert Everett) works as the caretaker of the local cemetery in the small Italian town of Buffalora. He's aided in his work by Gnaghi (François Hadji-Lazaro), a mentally disabled man only capable of saying "gna". (Like "nya" but not Brooklynish.) He spends most of his days reading old phone books ("Just because we've got the new ones doesn't mean to say we have to throw the old ones away. These books are classics!"), constructing a model of a skull, talking with his friend Franco over the phone, and seeking love.

Oh, he also kills the zombies that awaken every night with his revolver.

He calls them "Returners", and he has no clue why they are rising. He just knows through observation that it takes about seven days for a buried corpse to revive, climb out, and attack living humans. The worst part of the situation? He's not getting paid extra for this, and the mayor and the other citizens don't believe him. Even Franco just kind of humors him.

Things become a little more personal for Francesco when he gets tangled in an affair with a widow (Anna Falchi) who's recently buried her husband. He manages to seduce her in the graveyard one night. After this point in the film, events become increasingly weirder and surreal.

A 1994 movie, also known as Dellamorte Dellamore in Italy (and released under that same title in France), and as Mi novia es un Zombie in Spain. One of the few movies that mixes comedy, romance, zombie hunting, and existentialism, and mixes them well.