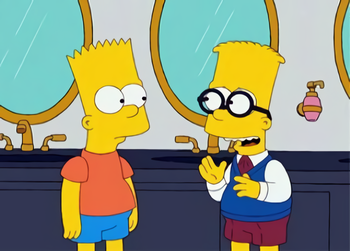 Piper: Wow...you look just like—!
Princess Peregrine: I know... this is seriously freaking me out. You don't think that we're—
Piper: Nah, I'd think I'd know if I had a twin sister. They say everyone has a double somewhere. I guess it's true!
— Storm Hawks, "Royal Twist"
Advertisement:

They say that everybody has got a double somewhere. After all, the Earth has a human population of about 8 billion; it would actually be stranger if no two people were at least vaguely similar in appearance. On the other hand, it's not as common in Real Life as it seems to be in media... or, at the very least, not as common for such individuals to actually meet.

On television this is often utilized for comedy, by making them very different people personality-wise.

As far as tropes go, this is one of the more ludicrously implausible ones. Take the probability of an Identical Grandson, ramp it up, and we're sort of in the right ballpark. This trope has stuck around mainly because it's a fun Plot Device. Meeting your own grandfather requires you to be in a Time Travel scenario, whereas a stranger can be, well, anyone more or less. Still, expect groans from the audience if this trope forces both identical strangers onto the screen at the same time a little too often. It gets past our Willing Suspension of Disbelief largely because it seems less improbable in the abstract than when we're directly confronted with it.

In works with Only Six Faces, Identical Strangers often turn up as well (occasionally to lampshade the Only Six Faces trope, but frequently just as a byproduct of it.)

When combined with Swapped Roles it results in Emergency Impersonation. Add both Swapped Roles and Fish out of Water and you have Prince and Pauper. If one gets put out of action, the other might be called upon to pull an El Cid Ploy.

If this happens in a Live Action scenario, the doppelganger is almost always played by the same actor or actress in an alternate role. (And oftentimes, in an animated scenario, by the same VA.)