Series / Scholar Who Walks the Night 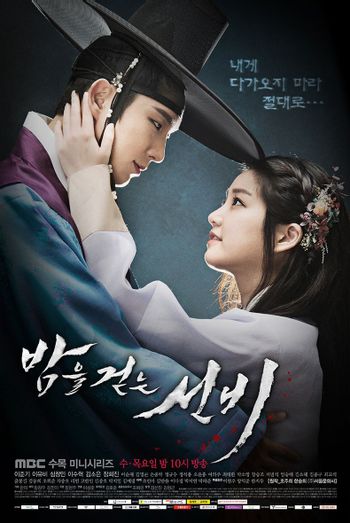 Scholar Who Walks the Night (밤을 걷는 선비) is a 2015 twenty-episode Korean Drama, based on the Manhwa of the same name.

Set in an alternate version of the Joseon dynasty, a cross-dressing bookseller struggling to make ends meet named Jo Yang Seon (Lee Yu Bi) meets the handsome and mysterious scholar Kim Sung Yeol (Lee Joon Gi). Unfortunately for Yang Seon, Sung Yeol is a vampire, and he is haunted by the loss of his first love Lee Myung Hee over a century ago. Seeking revenge for her death, things are further complicated when he meets Myung Hee's present-day Doppelgänger Choi Hye Ryung (Kim So Eun), an aloof nobleman's daughter. Meanwhile, the evil vampire Gwi (Lee Soo Hyuk) responsible for Myung Hee's death resides in the royal palace and uses his powers and political machinations to prevent the Crown Prince (Shim Chang Min) from ascending the throne.