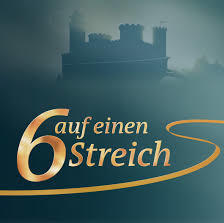 Sechs auf einen Streich (Six with one Blow, 2007—) is a German live-action TV series of fairytale adaptations, shown on Das Erste Deutsche Fernsehen. The seasons air yearly during Christmastime. The first season consisted of six episodes (hence the title). Initially concentrating on stories by The Brothers Grimm, the series has now adapted other authors too. Currently the show has thirteen seasons and 51 episodes, with the fourteenth season due December 2021.

Based on Brother and Sister.

Based on King Thrushbeard.

Based on Mother Hulda. It borrows some traits from the 1977 German adaptation.

Based on Sleeping Beauty.

Based on The Goose Girl.

Based on The Blue Light (a version of The Tinder Box).

Based on Snow-White and Rose-Red.

Based on Hansel and Gretel.

Based on a tale by Christoph Wieland from his Dschinnistan collection.

Based on several fairytale motives from stories by the Brothers Grimm and the infamous German film of the same name.