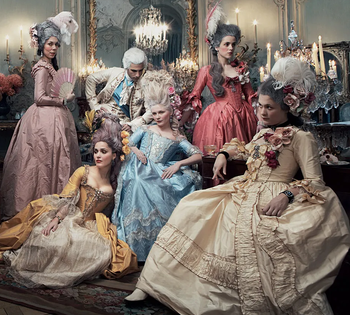 A film trope starting when colour was new and directors were eager to show off what it could do, and extending to the days when TV was widespread but mostly black and white, so big, colorful spectacles were a way of luring audiences back to the theaters. (However — as noted below in the entry mentioning the 1935 "Becky Sharp" — this trope actually began to be used in films when Technicolor, a reliable — if at the time expensive — method of producing color film — came into use.) The trope consists of setting your story in Period Pieces, at a time and place in which the costumes were (or people think they were) very beautiful, and using lots of actors and extras in these beautiful costumes.

Items of Gorgeous Period Dress include:

Films featuring Gorgeous Period Dress seldom show the dirt and grime of everyday life in the old days, which meant odd situations in which impoverished serfs and peasants would be perfectly clean, hygienic, and decked out in crisply pressed, laundered clothing. Of course, fantasies like Highlander and comedies like Blackadder or Monty Python and the Holy Grail had been subverting the trope for some time, but it wasn't really until Braveheart came along that the antiseptic look fell completely out of favor and most, if not all, period movies began dousing the laity with a generous layer of filth (indeed, 1994's First Knight was one of the last such films to play the trope completely straight). Period movies that employ this look nowadays usually do so out of budget constraints; making up costumes to look dirty and weathered is much more costly than just using off-the-rack outfits from wardrobe, and it makes them more difficult to re-use for other films.

It should be noted that this actually had its roots in theater, which seldom had reason to have plain or dirty clothes. Also keep in mind that this trope is not necessarily deceptive: there have always been those who delight in fancy clothing, and modern Western society is far from the first to promote daily bathing or liberal use of soap. The Romans may have bathed more than we do.

A Sub-Trope of Hollywood Costuming.

Contrast with The Dung Ages, where shows portray the past as uniformly filthy and bedraggled even when it's historically inaccurate. See also Awesome Anachronistic Apparel, where this trope is used in the present day.

Please note that Gorgeous Period Dress is not necessarily limited to eras before the 20th century. Movies and shows set in the Belle Epoque or Edwardian era (roughly 1900-1914), the Roaring Twenties, the Thirties, the Forties (especially the "New Look" period of the late 1940s and early 1950s when Christian Dior and other designers tossed aside the austerity of the World War II years to bring sumptuousness and elegance back to women's couture), and even The '60s, can and do use this trope.