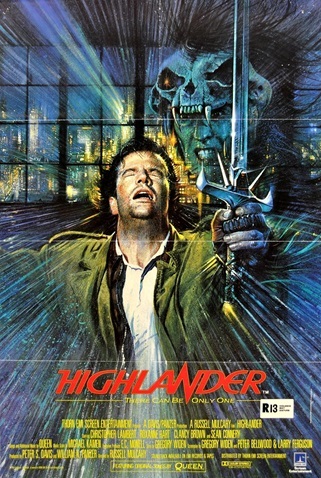 "There can be only one!"
"From the dawn of time we came; moving silently down through the centuries, living many secret lives, struggling to reach the time of the Gathering; when the few who remain will battle to the last. No one has ever known we were among you... until now."
— Ramirez
Advertisement:

The 1986 film that started it all. It was directed by Russell Mulcahy, with the screenplay written by Gregory Widen, Larry Ferguson and Peter Bellwood and the story by Widen. Queen provided several original songs for the film, which were later included on their studio album A Kind of Magic that same year.

Connor MacLeod (Christopher Lambert), who was born centuries ago in the Scottish Highlands (hence the title), is an Immortal fighting his way through a battle to the last man called The Gathering in 1980s New York City. As he tries to outsmart his dangerous rival immortal known as the Kurgan (Clancy Brown), the film occasionally flashes back to his past when he was married to the mortal woman named Heather (Beatie Edney) and was mentored by Juan Ramirez (Sean Connery) in the ways of combat.

The film had an unsuccessful theater run, but still managed to spawn a franchise, and gained a cult following.