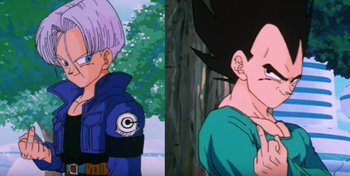 Like father, like son.
Ted: Now, we all know Robin's not what you'd call "touchy-feely." She doesn't say "I love you," like a normal person. Instead, she'll laugh, shake her head, give you a little smile and say, "You're an idiot."
Barney: "You're an idiot"?
Ted: If she tells you you're an idiot, you're a lucky man.
— How I Met Your Mother, "Robin 101"
Advertisement:

To show how well two people don't get along, one or both gives the other an insulting nickname and refuses to call them anything else. Over time, the nickname loses its bite as the characters learn to respect, if not like, each other. Then the formerly insulting nickname becomes more of a term of endearment.

This trope is a good way to show Character Development. As two people who initially disliked each other grow closer, the use of a formerly insulting nickname as a gesture of affection is a good way to showcase their evolving relationship. The Vitriolic Best Buds may see insulting nicknames as part of their snarky banter rather than something genuinely meant to hurt, and couples who use insulting nicknames as part of their Belligerent Sexual Tension may soften the use over time to show that They Really Do Love Each Other. This is more likely when one of them is a Tsundere or a Loving Bully. It also may be part of Romantic Ribbing. This is relatively common in Real Life, especially amongst boys and men (often developed in the manner stated above).

Not to be confused with Insult Backfire, when an insult is taken as a compliment, or Appropriated Appellation, when the person cleverly uses the insulting name to his/her own advantage. In order for it to be this trope, the original nicknamer has to change from using the name as a deliberate insult to using it as a term of endearment, or at least friendly ribbing. Contrast Terms of Endangerment, where a villain addresses a hero by an affectionate name but there's nothing behind it but hatred. Also see Affectionate Nickname. May also overlap with N-Word Privileges, when a group of friends use a word for each other that would be a horrible slur coming from anybody else.

Because this trope typically accompanies Character Development, there may be unmarked spoilers present.