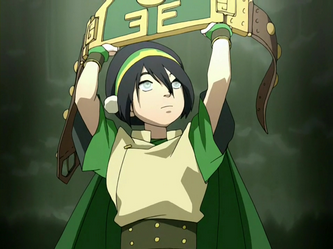 "The Blind Bandit" holding up the Champion's belt.
"My daughter is blind. She is blind and tiny and helpless and fragile. She cannot help you."
"Yes, I can."
Advertisement:

As the gang journeys into the Earth Kingdom proper, Aang's search for an Earth Bending teacher becomes more and more pressing. He enrolls in an Earthbending school, to little success; however, other students mention an underground Earthbending tournament, "Earth Rumble Six." Hopeful this might yield results, they go to find the show, watching a string of fights, each one being dominated by 'The Boulder', a tall, muscled man- perfect as a teacher. However, even he is defeated by the true champion; The Blind Bandit. Said champion is a young girl, barely twelve, and a member of the richest family in the area, and exactly the same girl that Aang saw in his vision. And she really is blind, but all the better a bender for it.

Aang is sure that this girl, Toph Beifong, is destined to be his teacher; however, her own reluctance and her father's resolute belief that his daughter is helpless poses something of a problem...