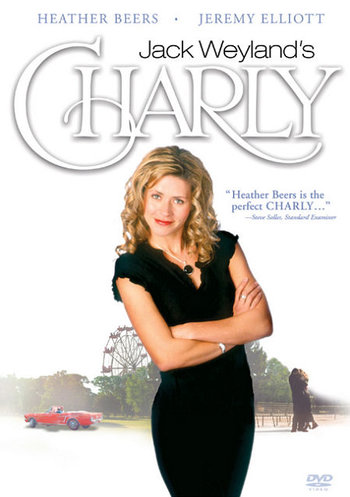 Real love stories have no ending.
"I always believed that love was fairly uncomplicated. You found the perfect woman, gorgeous but practical. You married, settled down with children, mini-van, mortgage, and lived quietly, predictably, happily ever after. That was my dream, until she came into my life."
—Sam Roberts
Advertisement:

Charly is a 2002 romantic film directed by Adam Thomas Anderegg based on Jack Weyland's book of the same name. Sam Roberts (Jeremy Elliott) is a devout Mormon from Utah who likes to sees the world in black and white. He meets Charlene "Charly" Riley (Heather Beers), a painter from New York who sees the world in a lot more color, turning Sam's world upside down. She's almost engaged to a man named Mark Randolph (Adam Johnson), though her parents don't really like him. However, when she starts to show a romantic interest in Sam, her parents now want to recruit Mark to win her back.

The film was re-released in 2012 in immersive 3-D with a couple new scenes.

Tropes appearing in the film: