This page assumes you have played FTL: Faster Than Light and will have unmarked spoilers for that game. 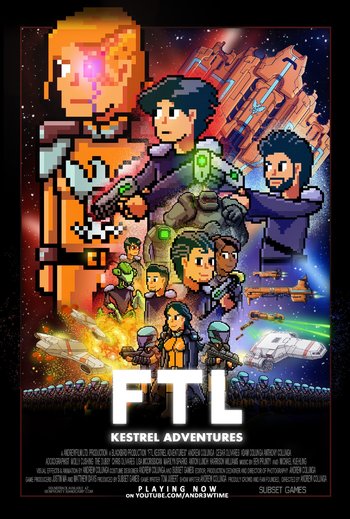 is a web series based off the roguelike game, FTL: Faster Than Light. Following two brothers, Jose and Ricardo Sandoval of the Galactic Federation salvage fleet who find information that may just end the war that has ravaged the galaxy. With their salvage vessel upgraded with weapons and a new weapons officer they set off to the last remaining Federation base, but the Rebel fleet is closing in, and they are not the first to start this journey...
Advertisement:

Now has its own Wiki

The web series by Andrew Colunga expands on the lore of the FTL universe and greatly expands the characterization of otherwise faceless crewmen using an art-style similar to the game's sprite art combined with occasional gameplay footage.