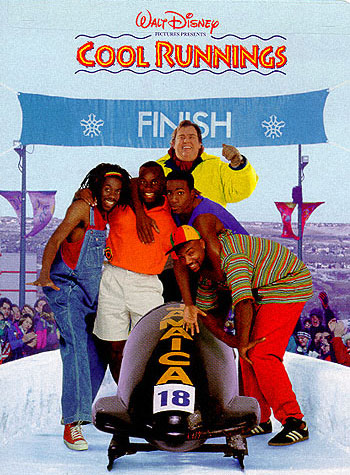 A Jamaican bobsled team?
Feel the rhythm! Feel the rhyme! Get on up, its bobsled time! COOL RUNNINGS!
Advertisement:

Cool Runnings is a 1993 live-action Disney film Very Loosely Based on a True Story about the Jamaican Olympic bobsled team.

Derice Bannock is a sprinter and wants to compete in the 1988 Olympic Games in athletics, hoping to live up to the legacy of his gold-winning father Ben. However, his competitor, Junior, trips and brings him down along with Yul Brenner (no, not that one) during the qualifying sprint race. The officials refuse to rerun the race, dashing the hopes of Derice and other competitors. Derice then has the idea to compete... at the Winter Olympics, in bobsledding.

Derice first convinces his friend Sanka to join him, then he finds Irving Blitzer, a surly former bobsledder himself and old friend of his father, who reluctantly agrees to coach him and his team. Irv tries to get out of it by showing a film reel of nothing but sled crashes to a crowd of potential teammates, but all this does is bring Junior and Yul to the team. The rest of the film is about working to overcome their lack of experience, the opposition of the Olympic Committee, the jeering and disbelief of the other teams, the internal struggles within the team, and the cold weather of Canada.

The film has some goofy farce and some dramatic moments, though it might lean a bit too much toward the former to qualify as a Dramedy.

The Jamaican bobsled team receives a slow clap as they carry their broken bobsled across the finish line.

The Jamaican bobsled team receives a slow clap as they carry their broken bobsled across the finish line.