Series / Once Upon a Time 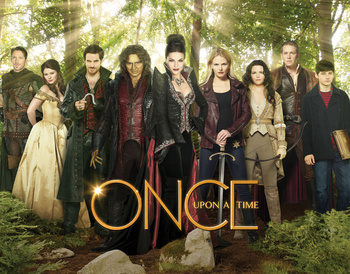 All magic comes with a price.
From left to right Robin Hood, Belle, Captain Hook, Rumplestiltskin, Evil Queen Regina, Emma Swan, Snow White, Prince Charming, Henry Mills
"There was an enchanted forest filled with all the classic characters we know. Or think we know. One day they found themselves trapped in a place where all their happy endings were stolen. Our World. This is how it happened..."
Advertisement:

Once Upon a Time is a Live-Action TV fantasy series that aired on ABC.

The Fairy Tales we know — or think we know — are real. The Evil Queen (Lana Parrilla) from the "Snow White" story takes her revenge on Snow (Ginnifer Goodwin) and her Prince Charming (Josh Dallas) by cursing the kingdom on the day of their child's birth. The only way to break the curse is to transport Snow's newborn child to our world, where she will return 28 years later to save the fairy tale residents of the Enchanted Forest.

After said 28 years, we meet Emma Swan (Jennifer Morrison), a reformed thief-turned-Bail Bondswoman (she prefers Bondsperson) who just so happens to be a Living Lie-Detector. We also meet a little boy named Henry (Jared S. Gilmore), who introduces himself as her son. He persuades her to leave Boston and take him home to Storybrooke, Maine, on the way telling her that his book of fairy tale stories is full of things that really happened. Emma, unconvinced, returns him to his adoptive mother, the Mayor.

The narrative gets switched back and forth between the past that takes place in the Enchanted Forest and the present that takes place in Storybrooke, and the truth is soon revealed: the Evil Queen won, and (most of) the citizens of the Enchanted Forest now suffer Laser-Guided Amnesia in Storybrooke. Emma — who is revealed to be the daughter of Snow White and Prince Charming — is the only hope they have of restoring their happy endings and breaking the curse on Storybrooke. Much of the first season focuses on Henry trying to convince his mother that the curse is real, while Regina tries her best to prevent Emma from finding the truth. At the same time, we learn more about the citizens of Storybrooke and their Enchanted Forest counterparts.

And that's just the beginning of a grand fairy tale of hope, family, death, redemption and many twists and turns.

Since ABC is owned by Disney, many of the characters are based specifically on their versions from the Disney Animated Canon, or deliberately altered from them to subvert audience expectations.

The show is also developing an Expanded Universe starting with Reawakened, a tie-in novel based on the first season. Marvel Comics is also creating a series of graphic novels based on the show. A Spin-Off series was greenlighted for the 2013-2014 season, Once Upon a Time in Wonderland, which gives Alice's Adventures in Wonderland the treatment that the original gives Snow White and myriad other fairy tales. In February 2018, it was confirmed that the in-progress season would be the last one. It ended its run in May 2018.

Has a recap page now.

Once Upon a Time subpages:

Example of:
Beast and Beauty