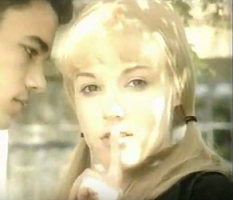 Stop talking, fridge!
"My name is Jane Harper. Welcome to my life."'
Advertisement:

A stylised and frequently bonkers soap opera that ran on the UK’s ITV network between 2001 and 2003. Aiming to recapture a youth audience lost to the channel with the poaching of Australian import Home and Away by the rival Channel 5, Night and Day revolved around six dysfunctional families living in and around the fictional Thornton Street in Greenwich, south-east London.

And did anyone mention the talking fridge of doom?

The show has often been described as ‘experimental’ and 'a British Twin Peaks' - not least due to its trippy dream and fantasy sequences; an eccentric cast of locals, including resident Wicked Stepmother-figure Rachel Culgrin (extravagantly portrayed by UK TV veteran Lesley Joseph); and a central storyline which revolved around the disappearance of the enigmatic Jane Harper on her sixteenth birthday.

Played by acting newcomer Georgina Walker, Jane frequently cropped up in flashbacks, daydreams and visions - sometimes comic, sometimes chilling - to haunt the family, friends and lovers she had left behind.

Oft-revisited footage of Jane walking in slow motion through a cemetery before literally vanishing became a visual touchpoint for the show. The image was also invoked in the soap’s infuriatingly catchy theme tune ‘Always and Forever’ - performed by former soap icon Kylie Minogue - with the haunting lyrics: ‘Night and day, say goodbye then slowly fade away...’

A second visual touchpoint (pictured above), which was also the final image of the show, featured Jane embracing the mysterious Josh Alexander, then turning to the Fourth Wall with a finger to her lips.

Complemented by a raft of secondary, more traditional soap opera plots (albeit frequently played out in a way that lampooned the genre), the primary narrative explored - often at glacial pace - which of Thornton Street’s residents might have been responsible for Jane’s vanishing act, and possibly, her murder.

Night and Day’s second key gimmick, embodied in its title, was that three 25-minute-long ‘day’ episodes aired on Tuesday, Wednesday and Thursday teatimes, while a re-cut, hour-long omnibus aired on Thursday nights. This ‘night’ edition introduced new and alternate scenes which didn’t appear in the daytime versions - usually featuring sexual references, violence or other adult themes - whilst condensing or excising many others.

Despite critical acclaim from some quarters for its quirky presentation, gothic atmosphere, immersive storylines and innovative use of popular music, mediocre ratings quickly led to cold feet by ITV executives, who unceremoniously ditched the daytime editions less than six months into the soap’s run.

The night-time omnibus survived for more than a year longer, though - allowing the show to accrue a minor cult following as ITV gradually pushed it later and later into a Thursday night graveyard slot, sometimes even running it without commercials in the wee small hours of Friday morning.

Happily for the diminishing band of diehard fans desperate for answers, a significantly advanced filming schedule allowed producers to respond to the show’s eventual cancellation with a firm, though characteristically wacky, resolution to Jane Harper’s story. This final episode aired at midnight on Friday 6 June 2003, to virtually zero fanfare - many TV guides having erroneously declared that the show had finished five weeks earlier.

Spoiler Note: Since Night and Day ended more than a decade ago, and is neither commercially available nor likely to become so, spoilers on this page remain untagged until somebody qualified decides otherwise.