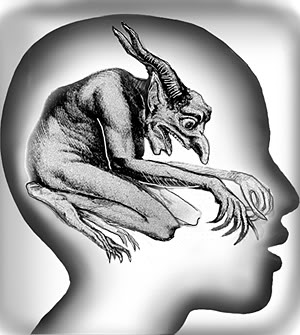 "A demon in his natural habitat."
"As the humble spirit you now see before you, I am free to cross over and possess any human I wish, enabling me to undo the sacred spells that keep you here. If you so deem it."
— Shendu, Jackie Chan Adventures, to his brothers and sisters
Advertisement:

You see, my dear, Shelvek the Seducer has taken possession of this fragile and handsome body from its rightful owner. How did I do this? Oh, there are so many delectable ways!

A Puppeteer Parasite can do this with science, but it lacks a certain je ne sais quoi. The Virus on the other hand simply cores out the host's mind like an apple, effectively "killing" the original personality and soul of the host immediately. And the Living Doll Collector uses People Puppets, how ingenious! What amazes Shelvek the Seducer is that you humans do it to each other, sometimes even after you've died! Not that it isn't deliciously kinky. Also, though it shames Shelvek the Seducer to admit it, this trope is not solely restricted to demons. Angelic Possession works in precisely the same way, except that those feathery hypocrites don't know how to have fun with it.

You may notice that I tend to appear slightly obscured behind the possessed in artful depictions. This pleasantly subtle fact emphasizes that Shelvek the Seducer is "in charge". Sadly, mirrors will reveal Shelvek's true nature, making social outings... problematic.

Oh, don't worry. I assure you, Shelvek the Seducer is the only one here. If my ten brothers were with me, we would be Many Spirits Inside of One. But then it would be cramped in this body and I don't like lack of space. And don't think about trying to get chummy with me; some may like a Symbiotic Possession, where the host and the guest are on good terms with each other, but I'm not a very sociable person. That said, you can rest assured I take good care of my meat-dresses, no sense taking over a body only to burn it out like a lightbulb.

And did I also forget to remind you that a Complete Monster is completely out of my league? Since they choose to be evil themselves, with or without being possessed? That's not to say there's anything stopping me from being one...

Hmm, you aren't bad looking yourself. Would you mind terribly if I "change clothes"...? Don't worry, you won't remember a thing afterwards. More's the pity.

The Core, the Master Computer that secretly rules Amphibia, uploads itself into Marcy, making her its new host.

The Core, the Master Computer that secretly rules Amphibia, uploads itself into Marcy, making her its new host.