Anime / Pokémon: Hoopa and the Clash of Ages 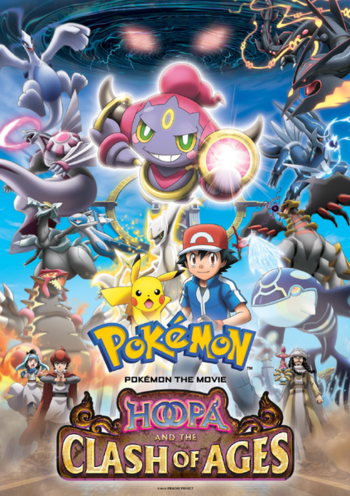 Pokémon decides to make its own version of Destroy All Monsters.
Advertisement:

Pokémon: Hoopa and the Clash of Ages is the eighteenth Pokémon: The Series film, and the first to be written by Atsuhiro Tomioka, coming out on July 18, 2015.

During their journey, Ash and friends stumble upon the mythical Hoopa, who is on a journey with its childhood friends Baraz and Meray to Desert City in order to purify its confined powers within the Djinn's Bottle. As fate has it, however, Baraz discovers that the sealed bottle houses a violent spirit born from Hoopa's confined Unbound form, which spirals into a clash between Legendary Pokémon as the heroes race against time to calm Hoopa Unbound down.

Hoopa and the Clash of Ages provides examples of: