Anime / Pokémon: Diancie and the Cocoon of Destruction 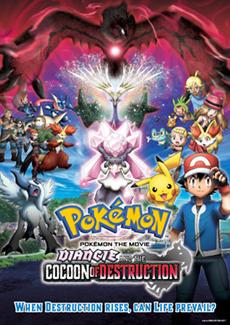 When "the sweet embrace of death" was first uttered, Yveltal took the saying quite literally.
Advertisement:

Diancie and the Cocoon of Destruction is the 17th movie entry in the Pokémon movie franchise. It is the debut of the legendary Pokémon Diancie and the anime debut of Yveltal and Xerneas. This movie follows Ash and friends as they journey through Diamond Ore Country with Diancie looking for Xerneas. Compounding problems is the Destruction Pokémon Yveltal living up to its title. Also appearing are the new Mega Evolutions. This movie appeared in Japanese theaters on July 19th, 2014. It made it's English debut in Australian and New Zealand theaters on November 8th later that year, and aired on Cartoon Network in the United States on the same day.

The movie ties in with the various "Mega Evolution" specials from the series, with side characters from the specials appearing in the movie.

Diancie and the Cocoon of Destruction features examples of the following tropes:

Alternative Title(s): Pokemon The Cocoon Of Destruction And Diancie