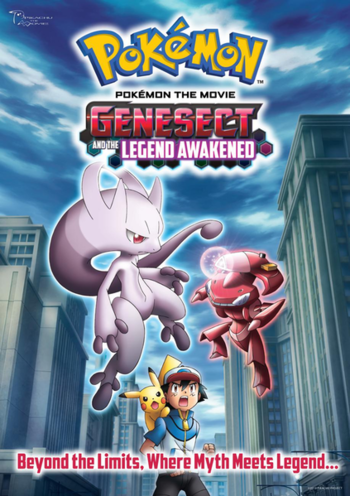 The return of both new and old-ish faces.
Advertisement:

Genesect and the Legend Awakened (known in Japan as ExtremeSpeed Genesect: Mewtwo Awakens) is the sixteenth movie entry in the Pokémon movie franchise, and the final entry for the Black & White saga of the anime.

It marks the anime debut of the legendary Pokémon Genesect as well as one of Mewtwo's Mega Evolutions introduced in Pokémon X and Y. The movie follows Ash, Iris, Cilan, and their Pokémon as they arrive in New Tork City, which is being attacked by the Genesect Army, a group of five Genesect led by a Shiny one known as the Red Genesect. The only one who can stop them is Mewtwonote a different individual than the one from the first movie, who notes that the Genesect are made by humans, just like it was.

Additionally, the film was accompanied in Japan by the Pikachu short Eevee and Friends, which was streamed on the English website's Pokémon TV service

from December 6th, 2013 to December 15th, 2013, during which time the service was known as "Eevee TV" and featured Eevee-themed Pokémon episodes.

Just like The First Movie, this one had plot elements set up, this time within the Team Plasma Arc of the Best Wishes Series, and it had a prologue special episode as a lead-in.

Genesect and the Legend Awakened features examples of the following tropes: