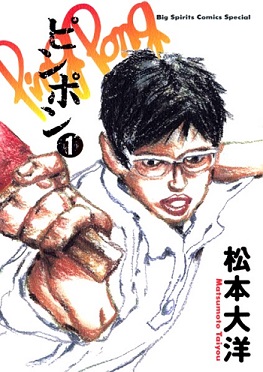 Ping Pong is a Japanese sports series that had its humble origins with a manga by surrealist Taiyo Matsumoto, best known for Tekkonkinkreet and Sunny. The series ran between 1996-7 in the magazine Big Comic Spirits. Time passed and, lo and behold, an adaptation came to fruition. The 2002 live-action film, directed by Fumihiko Sori, was considered widely successful. The film was important in establishing Shidō Nakamura II as a bankable star, who won a Japanese Academy Award for the role of Dragon. Over a decade later, the series would resurface again as an anime called Ping Pong: The Animation. Directed by Masaaki Yuasa, often considered to be Matsumoto's anime equal, the series premiered in the spring season of 2014, quickly becoming a sleeper hit over an eleven-episode run.

The story itself follows the lives of five ping pong prodigies, who are preparing to break into the professional level of competition. You have:

Like most works by Matsumoto and Yuasa, the main subject matter is not the true focus. The story takes more time to establish the four prodigies, exploring their motives for playing, their trauma and limits, and what they seek to accomplish after they win matches.

The series itself is very unique in art direction, specifically towards the manga and anime. Both apply a very cartoonish feel, utilizing minimal detail in the foreground, while having an overall realistic background. Additionally, humans take on a caricature style, appearing flat and rigid. Despite this, the feelings associated with movement are not lost.

Not to be confused with The Ping-Pong Club, though considering the style and tones of both shows, that's not going to be happening any time soon.