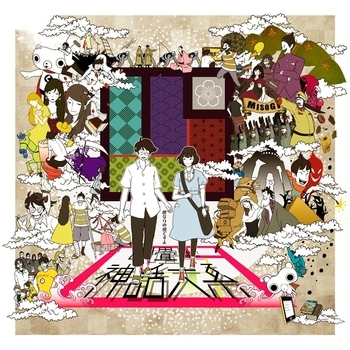 Then I was a brand-spanking new freshman university student and countless doors to the mystical treasure that is known as that 'rose-colored campus life' lay open before me. I was half-swooned with glee. And the one I chose was...!
Advertisement:

Yojo-han Shinwa Taikei (A Compendium of 4.5 Tatami Mythology) is a 2004 novel by Tomihiko Morimi, narrated by an unnamed third-year agriculture student at Kyoto University. After getting dumped by a crush in his first year, he's become convinced the idealised, lovey-dovey campus life he expected will never become reality, and as a result, has wasted the last two years ruining the love lives of others at every opportunity with his partner in crime, Ozu. Despite this, the narrator has taken a liking to Akashi, a girl one year his junior.

One late night while eating ramen at a cart near his boarding house, our narrator meets a man claiming to be a god of matrimony. The god tells the protagonist that come the tenth lunar month, the gods will gather in Izumo and determine who will marry whom—and Akashi's hand is either going to him or Ozu. When a fortune teller further tells him he's at a crossroads—one path leading to a life of happiness, the other leading to more frustrating monotony—the narrator realizes that he needs to get a move on and truly experience all that his college years have to offer.

The novel was adapted to anime for Noitamin A's spring 2010 season, directed by Masaaki Yuasa of Kaiba fame and produced by Madhouse. Funimation licensed it for a streaming-only, English-subtitled stateside release on the Funimation website, YouTube, and Hulu under the Market-Based Title The Tatami Galaxy.

The series has a Spiritual Successor in the 2017 anime film, The Night Is Short, Walk On Girl, an adaptation of another Morimi novel produced by the same creative team featuring the same setting and sharing a few minor characters.

In 2020, the original book received a crossover sequel with the Makoto Ueda stage play Summer Time Machine Blues. Titled Tatami Time Machine Blues (Yojohan Time Machine Blues), this book follows Ozu and the Protagonist going back in time to prevent their dorm's air conditioner remote from being broken. This book was announced to have an anime adaptation in 2021—alongside an official English translation of the original Tatami Galaxy novel.