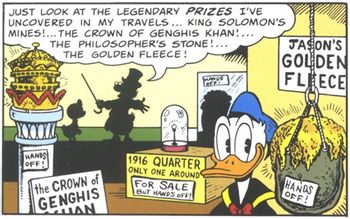 A single shot, scene, line or panel full of Continuity Nods. This gives long-time viewers satisfaction that the previous exploits they saw are in this entry's canon, and encourages newer readers to Archive Binge to see what they missed, without getting in the way of the current plot too much.

Sometimes shows up as an extreme form of Back for the Finale, where everybody in the show comes back for the Grand Finale.

Superhero Trophy Shelf is a sub-trope. Fully Automatic Clip Show is a Sister Trope, where previous events are shown, instead of referenced, in rapid succession. This is one way an author can Pander To The Base. May be driven by a Fighting Across Time and Space sequence where several previous locations are revisited.