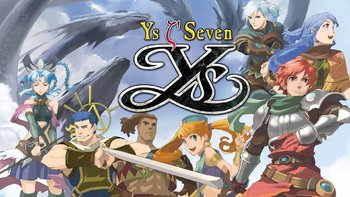 The eighth primary installment of the Ys franchisenote Due to Ys Origin being the seventh major installment, Ys SEVEN was originally released in 2009 exclusively for the Sony PlayStation Portable, until it was ported to Microsoft Windows in 2012, but only for China. However, XSEED Games released a worldwide Steam version in 2017.

Set after Ys VI: The Ark of Napishtim, series protagonist Adol Christin and his traveling companion Dogi journey to the "Kingdom of Altago", located west of Xandria on the continent of Afroca, where they are commissioned by King Kiemarl to investigate the unsettling increase of natural disasters plaguing Altago. The two discover an ancient shrine dedicated to one of the "Five Great Dragons" that watch over Altago, and is granted its power. Spurred on by the warning he receives, Adol must locate the four remaining shrines if Altago is to avert a prophesied disaster.

The first Ys title to introduce an active party system, players have the ability to form a party of three allied characters where they control the lead member while the AI commands the other two. Unlike previous Ys games where elemental weapons are used, damage in Ys SEVEN is determined by the type of weapon wielded by a party member via "slashing", "striking" and "piercing" attributes. Furthermore, characters can perform different attack skills by filling a skill gauge as they damage enemies. Finally, by blocking at the last moment before an enemy attack connects, a "Flash Guard" will activate, wherein no damage will be incurred against players, while granting them a Critical Hit for the next successful attack dealt at enemies.

This game has the following examples: