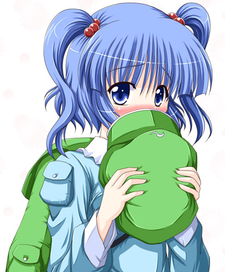 While blondes are foolish or innocent and redheads tend to be aggressive or evil, blue hair depicts a person being either shy or nervous, or even both. Either way, blue hair is very common in fiction, particularly in anime, and if the character has Elemental Powers, they are probably Making a Splash as An Ice Person. Because of this, they are often paired with, or contrasted with, a redhead or someone with fire powers or a very strong and passionate personality.

Interestingly, these people also tend to be the most rational or intelligent in the group, perhaps because being socially timid is associated with bookworms. Sometimes, they seem very aloof and stoic, tending not to make any friends of their own. If they are, they are usually revealed as having a kind, friendly nature. In this way, they are the direct opposite of a Fiery Redhead. A Red Oni, Blue Oni pairing can be made with them by making the redhead brash, strong, and passionate, and the blue one calm, quiet, and down-to-earth.