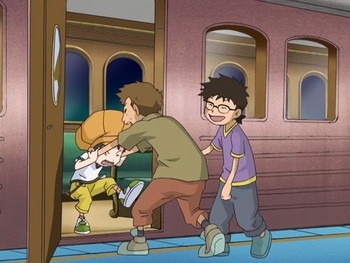 Hey, wait a minute. I can't defend everything I did back in junior high, I mean who can? But let's face it, when you show up at school wearing a tweed blazer with elbow patches and carrying a valise, I mean, I think the guilt here is fifty-fifty.
— Danny Kreasel to Niles Crane, Frasier
Advertisement:

We know Kids Are Cruel at times, but unfortunately for some kids, they're more susceptible to being picked on, teased and bullied. It could be how they dress, how they act, how they look, and possibly for bad actions in the past. In any case, it's only them that's singled out. The Bully or a Gang of Bullies makes their school days a living hell. Their days at school are filled with wedgies, being stuffed in lockers, being subjected to cruel gossip and even worse. These characters usually project meekness and timidness which makes it easier for them to be targeted.

Played for Laughs, this could lead to some funny gags. But when Played for Drama, the character's plight will make you cringe as well as cry. This character isn't the Cool Loser, that's usually saved for the protagonist who will more often than not befriend the Bully Magnet out of the kindness of their hearts.

The Bully Magnet is usually a geek, nerd, or a loner (oftentimes a boy) and on the bottom of the Popularity Food Chain. A favorite target of the Jerk Jock or Alpha Bitch.

Also see to All of the Other Reindeer for characters outcast out of other settings other than a school one/between children and usually applied to The Hero or the villain.

Sadly, this is Truth in Television for people who were bullied in the past. This is a delicate topic for some, so try to avoid Victim-Blaming.