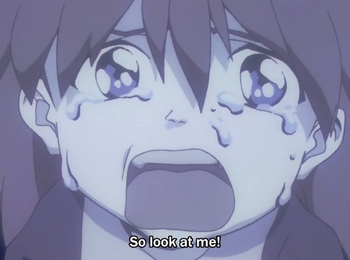 A character (sometimes a Stepford Smiler) may be Not Himself and has a breakdown to show this. This may be expressed by laughing, a Broken Smile, being hunched over, having a twitchy eye, messy hair and the like. In this case, a good way to show that a character is experiencing a mental/nervous/emotional breakdown (sometimes with some Sanity Slippage attached) is to have them feel tears come to their eyes or outright running down their face, often the climax of a severe Break the Cutie ordeal.

Different from Berserker Tears in the sense that the character isn't crying out of rage. See also Villainous Breakdown for the villain that does this although it can sometimes overlap. Often results in a Tear Jerker. Compare Inelegant Blubbering and contrast Manly Tears and Tears of Fear.