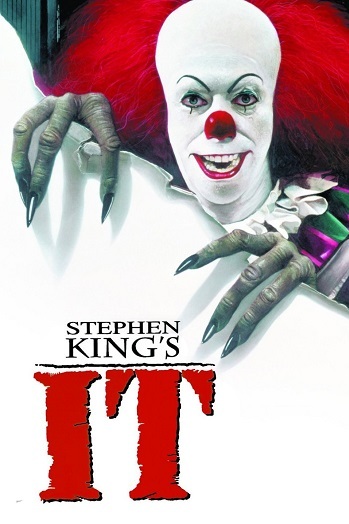 "They float... and when you're down here with me... you'll float too!"
Advertisement:

It is a 1990 supernatural horror TV miniseries adapted from the horror novel of the same name by American author Stephen King; while not the first miniseries adaptation of one of King's works or even the first TV adaptation (with both distinctions going to 'Salem's Lot in 1979), it is easily the most popular and enduring of the bunch. Relatively faithful to the book within the confines of broadcast television standards, the story revolves around an inter-dimensional predatory shapeshifter which has the ability to transform itself into its prey's worst fears, allowing it to exploit the phobias of its victims. It mostly takes the form of a sadistic, wisecracking clown called Pennywise. The protagonists are The Losers Club, a group of outcast kids who discover Pennywise and vow to destroy him by any means necessary. The series takes place over two different time periods, the first when the Losers first discover Pennywise as children, and the second when they're called back as adults to defeat Pennywise, who has resurfaced.

A career-defining role for Tim Curry, this miniseries scared a generation of kids (and adults) when it came out.

Example of:
The Man in the Moon