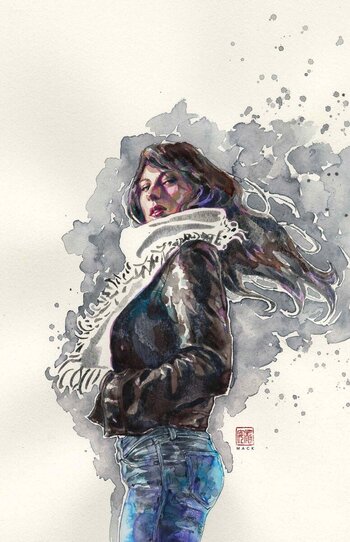 I like how you still try to plan the day even though we do what we do and deal with all that we deal with and our day never goes as planned.
— Jessica Jones to Luke Cage, Jessica Jones #12
Advertisement:

Jessica Jones is a 2016-2018 comic book published by Marvel Comics. It was written by Brian Michael Bendis, with art by Michael Gaydos and covers by David Mack and served as a Sequel Series to Alias. It lasted a total of 18 issues.

Alias Investigations is back in business, but former-superhero-turned-private-detective Jessica Jones has a mess of problems to deal with. For starters, her life has fallen apart after she took her daughter away from her husband for some unknown reason. She's searching for secrets that are more dangerous than ever, plus she has some secrets from her own haunted past that she doesn't want to get out. And she's taken on a case that may, in fact, kill her.

Just another day in the life of Jessica Jones.