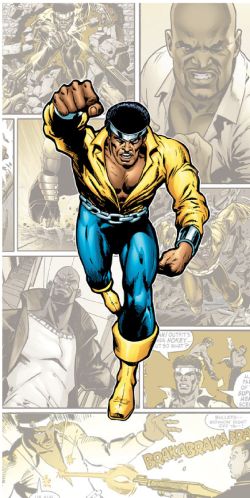 Luke Cage, (aka Power Man) is a Marvel Comics superhero, originally created as part of the 1970s blaxploitation craze. He first appeared in "Hero for Hire" #1 (June, 1972), created by writers Archie Goodwin and Roy Thomas, along with artists John Romita, Sr. and George Tuska.

Luke's original name was Carl Lucas, and he grew up on the streets of Harlem. Convicted of a crime he didn't commit, he was offered a chance at parole if he'd participate in a prison experiment on cell regeneration. The experiment was sabotaged by a prison guard with a grudge against Lucas, granting him super strength and Nigh-Invulnerability. Traumatised by the experiment, Lucas lashed out at the guard, then, fearing that his lash-out would see him losing parole, made a break for it. Returning to New York, he was inspired to become a 'hero for hire', helping out anyone who could pay his price, and adopted the pseudonym "Luke Cage".

He originally had his own solo title, known as "Hero for Hire" for 16 issues (June, 1972-December, 1973), then as "Power Man" for issues #17-49 (February, 1974-February, 1978). In issue #50, Luke was teamed up with Iron Fist. The series continued as "Power Man and Iron Fist" for issues #50-125 (April, 1978- September, 1986). With its cancellation, Luke was left with no regular series for a few years. He returned to stardom with "Cage" vol. 1, which ran for 20 issues (April, 1992-November, 1993). "Cage" vol. 2 was a 5-issue miniseries (March-September, 2002) by Brian Azzarello. In 2005, Luke joined the New Avengers and has been a regular ever since. In this period Luke married Alias star Jessica Jones. They have a daughter, Danielle. After Dark Reign Luke became the man in charge of the Thunderbolts up through the end of the series. When Wilson Fisk, the Kingpin, made a second run for mayor and instigated an anti-mask law during Devil's Reign Luke Cage ran against him. Fisk’s arrest and loss of power meant that Cage ran unopposed and is now Mayor of New York.

Luke Cage has appeared in the following works:

An additional interesting trivia note: Once upon a time, a young comic book fan named Nicolas Coppola wanted to achieve success in Hollywood without riding on the coattails of his famous uncle, so he deliberately chose a stage name inspired by the good Mr. Cage. The rest, as they say, is history.