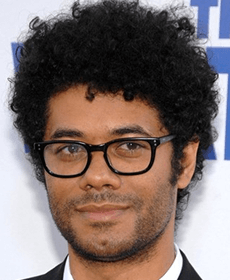 Richard Ellef Ayoade (/aɪ. oʊˈɑːdi/, born 23 May 1977 in Hammersmith, London) is a British comic actor, director, and writer. He is probably best known for playing the socially awkward, deeply nerdy character of Moss in The IT Crowd, and he often projects a similar persona in other roles and when appearing on celebrity quiz shows or presenting factual programs. This is somewhat deceptive. Ayoade may be somewhat awkward and nerdy in real life, but he’s also highly accomplished; aside from having a law degree from Cambridge University, he’s written and directed feature films and music videos,

and is generally highly versatile as well as smart.

Tropes associated with Ayoade or his characters