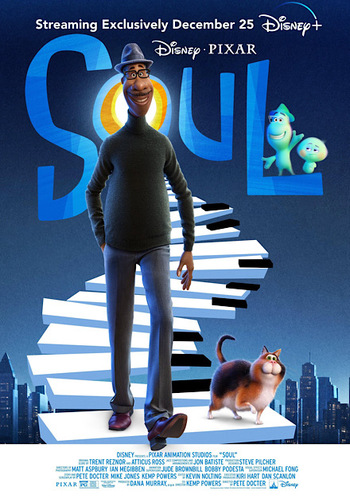 "What would you want to be known for on Earth?"
"We only have a short time on this planet. You want to become the person that you were born to be. Don’t waste your time on all the junk of life. Spend your precious hours doing what will bring out the real you. The brilliant passionate you, that’s ready to contribute to something meaningful into this world."
— Joe Gardner
Advertisement:

Soul is a 2020 animated film by Pixar. It is directed by Pete Docter (Monsters, Inc., Up, Inside Out) and Kemp Powers, (who was also one of the film's screenwriters) starring Jamie Foxx, Tina Fey, Questlove, Phylicia Rashad, and Daveed Diggs. The film released on Disney+ on December 25, 2020, making it Pixar's first direct-to-digital film upon release (albeit strictly for circumstantial reasons); a release on conventional home media and VOD platforms followed on March 23, 2021.

The plot centers around Joe Gardner, a middle school music teacher in New York City who dreams of performing jazz music on stage. One of his past students invites him to audition for a legendary saxophonist, who is so impressed by his playing that she hires him for her quartet. However, after Joe suffers an accident on the way home, his soul ends up separated from his body. While being transported to a place called the Great Beyond, he panics and falls into the You Seminar (formerly the Great Before), an ethereal plane of existence where souls develop and gain passions before being transported to a newborn child. Joe must work with 22, a soul-in-training with a dim view on life after being trapped for years in the You Seminar, in order to return to Earth and get back into his body before it's too late.

Not to be confused with the book. Soul was supposed to be released in theaters with the Pixar Short Burrow, but in the United States both films were released digitally. In some international markets they did play together in theaters.

Jerry introducing herself to Joe.

Jerry introducing herself to Joe.